In this video we are talking about aspect ratios. More specifically we will talk about some of the most used aspect ratios, how you can use them to your videos correctly and what values you need to type in your projects or sequences to create a video in that aspect ratio.

What is an aspect ratio 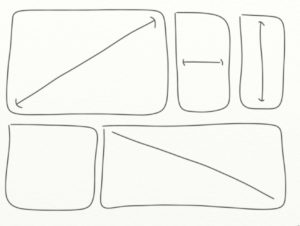 16 by 9 is the standard for everything. Wide screen DVDs are 16 by 9, 1920 by 1080 HD video is 16 by 9 even a 4k UHD is a 16 by 9 format. That is the standard for all film and digital media. So whenever you pick up your camera, your cellphone your video camera, what ever it is it is shooting at 16 by 9 format. Also the video you are just watching right now is set to 16 by 9 aspect ratio. If you want your video to have a 16 by 9 aspect ratio you will have to use these values:

This is the aspect ratio that newer phones and ever some computer screens use. Also one thing that I like about this aspect ratio for youtube is that it creates a small letterbox on top and bottom when you see the video on 16 by 9 screen that creates space for the title of the video and the timeline at the bottom.

Next we have the 4 by 5 aspect ratio and these are the values you have to type in to use it:

The 4 by 5 is perfect for instagram feed posts, as it will cover more space as the user scrolls down in THE feed so the video will get more attention to your viewer’s eyes.

Now if we revert the 16 by 9 to a more vertical point of view, we get the 9 by 16. And this is the standard aspect ratio of vertical videos. This aspect ratio is perfect for instagram, facebook and youtube stories, tiktok, igtv, and also is the ratio you get when you shoot with your mobile phone vertical. These are the values that you have to use to get the 9 by 16:

One important tip for this aspect ratio coming from the master of vertical filmmaking Jesse Driftwood is to shoot with your camera or cell phone in a vertical mode, to avoid losing a ton of information from cropping your videos later in post.

How to learn video editing with Final Cut Pro X

Emilio Takas is a multifaceted digital creative and content creator who has been in love with videos, photos and music his whole life.

With his easy-to-understand and follow tutorials, real life reviews and creative short-films, his goal is to help the viewers of his self-title youtube channel create better videos.

We use cookies on our website to give you the most relevant experience by remembering your preferences and repeat visits. By clicking “Accept”, you consent to the use of ALL the cookies.
Do not sell my personal information.
Cookie SettingsAccept
Manage consent

This website uses cookies to improve your experience while you navigate through the website. Out of these, the cookies that are categorized as necessary are stored on your browser as they are essential for the working of basic functionalities of the website. We also use third-party cookies that help us analyze and understand how you use this website. These cookies will be stored in your browser only with your consent. You also have the option to opt-out of these cookies. But opting out of some of these cookies may affect your browsing experience.
Necessary Always Enabled
Necessary cookies are absolutely essential for the website to function properly. These cookies ensure basic functionalities and security features of the website, anonymously.
Functional
Functional cookies help to perform certain functionalities like sharing the content of the website on social media platforms, collect feedbacks, and other third-party features.
Performance
Performance cookies are used to understand and analyze the key performance indexes of the website which helps in delivering a better user experience for the visitors.
Analytics
Analytical cookies are used to understand how visitors interact with the website. These cookies help provide information on metrics the number of visitors, bounce rate, traffic source, etc.
Advertisement
Advertisement cookies are used to provide visitors with relevant ads and marketing campaigns. These cookies track visitors across websites and collect information to provide customized ads.
Others
Other uncategorized cookies are those that are being analyzed and have not been classified into a category as yet.
SAVE & ACCEPT